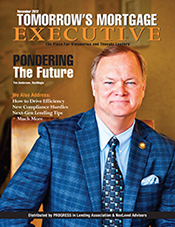 Tim Anderson looks back at how the mortgage business has changed and warns that fundamental change is coming in the future.

Once again, “e” process pioneer and evangelist Tim Anderson is making news. In short, Anderson, a known advocate of electronic commerce and eMortgages, has joined DocMagic as head of the firm’s new eServices Division. In his new role, he will help DocMagic grow its market share as the industry continues to adopt electronic means of fulfillment. Things are a bit different now as compared to the late 1990s before even the creation of MISMO. Today full eMortgages are actually being done. And even if lenders aren’t doing full eMortgages, they are literally being forced to go “e” around certain processes to ensure compliance with the advent of a ton of new rules and regs.

Tim has certainly been around the block a few times. He knows the mortgage space and has been a constant voice for change. He is a forward thinker. But there’s more to the mortgage business then just paper-based lending. So, we caught up with him to ask him farreaching questions about what he thinks is coming next for the entire mortgage business. Here’s what he said:

Q: How did you get started in the mortgage business?

TIM ANDERSON: I got into this business a while back. At that early stage in my life I did not have clear goals as to what I wanted to do. I was just out of college really. I started in an account management position. It was a great job. At that time it was really about building relationships.

Q: How has the mortgage process changed through the years? Is it a lot different as compared to what it was when you got started?

TIM ANDERSON: I feel that change comes when the GSEs or the federal government mandate it. The core way that we do business in mortgage banking has not changed all that much, but with DoddFrank and the creation of the CFPB, you are seeing some change. Prior, Fannie and Freddie introduced DU and LP, really supported AVMs, introduced policies and procedures around loan quality and data validation, etc. As I look at those changes, I view that as systems changes, not process changes. Today, with the CFPB in particular, they are looking to change the process. It’s all about transparency, accuracy and not abusing the borrower. I believe that we are going to see fundamental change. If you think about it, they have up to 1,000 attorneys at the CFPB and their job is to go in there and fi nd faults with the process, and that’s exactly what they’re doing. For example, CapOne had a $25 million lawsuit. These are serious issues.

Q: Speaking about the CFPB, what are your thoughts on the new forms requirements coming out of the Know Before You Owe initiative that will redeﬁ ne the TIL, the GFE, the HUD, etc.?

TIM ANDERSON:  I am supportive of the educational focus at the CFPB. Shame on you for signing a document that you don’t know anything about and saying that you were duped after the fact. Consumerism 101 tells you that you don’t sign a document that you don’t understand. Know Before You Owe will make these documents simpler and get rid of the legalese. However, we have to remember that the current documents are not out there to abuse the borrower. Nonetheless, new simpler forms can make it more streamlined, easier to understand, and I agree with that.

Q: Let’s shift to talk about the implementation of these new forms. What do lenders and vendors have to do to be ready? And will the industry be prepared to comply when the time comes?

TIM ANDERSON: FHFA, through UMDP, which endorses MISMO, makes sense because they are taking a systematic approach of making sure that the data in one place matches the data throughout. That’s the right approach because you’re automating compliance. With the CFPB, myself, Rick Hill from the MBA, and others are trying to educate them about the mortgage process. The CFPB is changing the forms to make them easier for the consumer to understand. That’s a laudable effort, but when you get into data accuracy they have summarized the HUD, which is tough when it comes to proving that the lender’s data matches.

You have to get granular, down to the data. The HUD has all the closing data and when you summarize that so the consumer can better understand it, you eliminate the accuracy and detail, which can make it harder to do the calcs. So, if you summarize the fees it will be harder for the lender to prove that they match up on the GFE and TIL. We are trying to educate the CFPB about the value of taking it down to the data level because lenders depend on the fee lines to generate a compliant GFE and TIL. On the new forms the fee lines are merely summarized. It’s a trade off.

Q: You talked earlier about how things like Dodd-Frank and the CFPB will ﬁ nally bring about transformative change. How so? Can you ﬂesh out those thoughts?

TIM ANDERSON:  The intent is to make the initial documents and the closing documents as accurate and transparent as possible. If closing documents have to be presented before closing to the borrower, which is being proposed, how does a lender do that? If you don’t have an electronic platform that will be a huge burden for the lender to do in a paper world. So, I believe this will drive electronic closing. This will force electronic mortgage adoption because you as a lender can never give up control of the process. You only get there in an electronic world. That will be a huge change.

Q: Is this something that lenders are embracing?

TIM ANDERSON:  Until the rule becomes imminent, it’s not on their radar screen. Lenders have to conduct their business, so it doesn’t get on their radar until there’s a date published for mandatory compliance. The mortgage industry is reactive vs. proactive. So, we’re trying to educate lenders that this is a better process anyway even if it isn’t mandated. Change is painful, but once it becomes law it will happen and it will be good for our industry because it will provide better control, more accuracy, total transparency and it eliminates any surprises. The law wants to take the guesswork out of the process. The law says that the lender should know the numbers at the time of app and they should share that with the borrower. That’s the intent.

Q: Personally, you just joined DocMagic. Why did you make this professional change?

TIM ANDERSON: I had actually given up on the idea of the industry adopting and implementing a true, legally compliant paperless eMortgage process in my lifetime, but with the advent of the new disclosure requirements the CFPB is imposing and the OCC Consent Decree on the servicing side, I don’t know how lenders are going to be compliant unless they implement a paperless process to track notifi cations and execution of documents electronically to prove their activities for compliance auditing and reporting purposes. DocMagic sees this as I do, as compliance driving adoption and providing a great opportunity to fi nally implement compliant paperless processes to respond and comply with these regs. I just don’t see how they can maintain compliance if they are printing, faxing and mailing paper documents around in the old paper-based processing world. It’s just too ineffi cient, costly, hard to manage, maintain and prove compliance.

Q: What do you hope to accomplish at DocMagic?

TIM ANDERSON:  Don Iannitti gave me the opportunity to create a new eServices Division to implement compliant paperless processes (eServices) to extend beyond our original initial eDisclosure service to complete the process of eClosing, eNotarizing and eRecording the closing documents. We are also looking at the servicing side, since I don’t see the backlog of loans in loss mitt going away anytime soon, to address the same issues of getting documents executed online in real time to expedite the process and provide the electronic evidence and audit trail of what you have done with the consumer all along the way in a more timely and effi cient manner.

Q: How do you deﬁ ne true mortgage innovation?

TIM ANDERSON:  If you’re an operations person, doing what you’re doing better is a major win, but to me that’s not innovation. As we look at the forces of change that we’ve discussed, think to yourself: Do you just throw people at the new process and just deal with it in a manual way or do you automate? There are new approaches that technology can better address. What’s lacking in our space is that there are not a lot of true thought leaders that understand the whole business. They understand their piece and they have ideas on how to improve it, but they don’t understand what happened before or what happens after they handle that loan. It’s hard to look at the overall process and make the overall process better. That takes a global view and broad understanding, which is hard to fi nd in this business. I was with a large lender and they said, “We never originate a bad loan until it gets to servicing.” It was meant as a joke, but it’s really true. If you don’t know what happens in servicing, how can you originate the best quality loan?

Q: Pie in the sky, what do you see as the future of the mortgage industry?

TIM ANDERSON:  The government is squeezing the profi t margins so the longterm players are going to be the winners. There is still a place for smaller, independent players, but that will be a niche. It’s going to be harder and harder to be a non-bank entity and have any scale in this business. Also, because the margins are going to continue to get squeezed you can’t keep throwing people and paper at the process anymore. In the old days you could charge more points and there were different fi nancial instruments and investors that could offer the lender more profit. That’s not happening anymore. So, the only way to survive and scale is to automate. A fundamental change is happening and it favors the big guys.

Lenders need to understand the impact that new compliance rules and regulations will have on their operation. You can no longer do manual processing of loans. FHFA wants a systematic data validation process through MISMO to force data quality. On the other side, you have the CFPB mandating new processes for the good of the consumer. With these two forces for change, lenders will have to automate and fi nally get rid of the paper.

---
About Tim Anderson
During his career, Tim Anderson has been involved in many aspects of the mortgage industry and has acquired more than 30 years of mortgage and technology experience. Most recently, he has been heavily involved on the technology side of the industry, where he played an instrumental role in developing one of the ﬁ rst e-mortgage platforms, including e-signature and e-vaulting technologies. At DocMagic, Tim will act as the head of the ﬁ rm’s new eServices Division where he will spearhead future “e” initiatives at DocMagic.

As featured in Progress in Lending, November 2012.